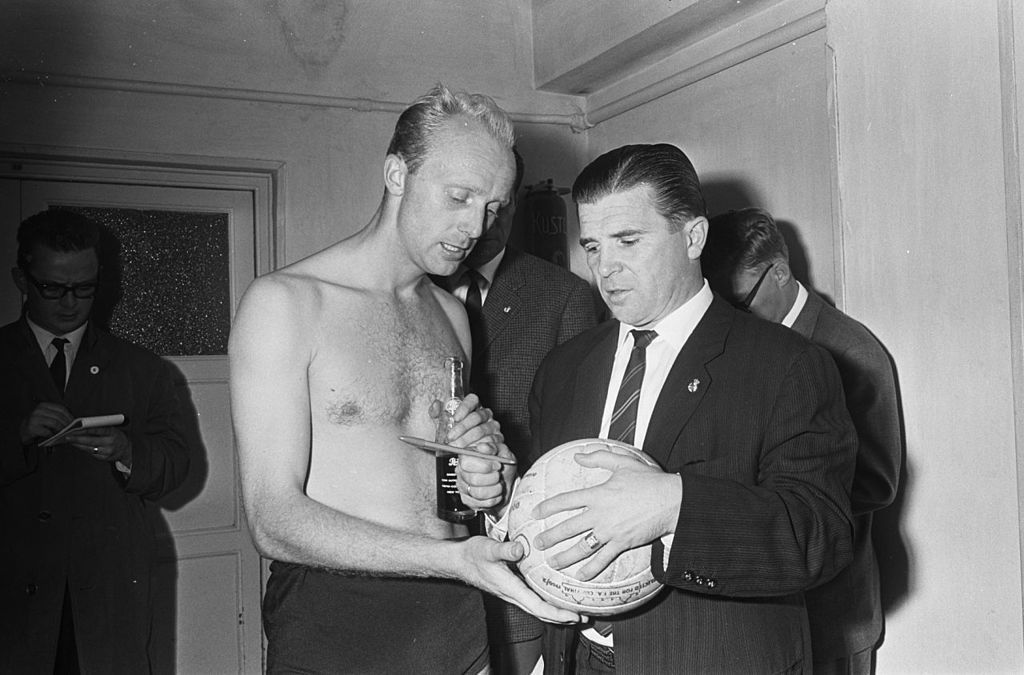 Three of the greatest players of the last ten years, Messi, Neymar and Ibrahimovic, are at the top of one very special league table.  They are the footballers nominated more than any other for the prestigious FIFA Puskas Award, presented annually to the scorer of the most wonderful goal of the year.

First won by Cristiano Ronaldo in 2009, this prize is a fitting tribute to a player who is undoubtedly one of the game’s true legends.

With an astonishing record of 84 goals in 85 Internationals representing Hungary, the short, barrel-chested dynamo eclipses other greats of the sport – effectively scoring a goal per game outguns stars such as Pele (0.84 goals per match for Brazil), Klose (0.52 for Germany) and Rooney (0.44 for England).  Yet what makes his achievement so remarkable is that for what may well have been the most productive years of his footballing life, Puskas lived in exile from the Communist regime and was effectively out of the game.

Initially, the Communist Party was keen to promote the skills of the ‘Magical Magyars’, creating a club, Budapest Honved, where the best players in the country were gathered together and, fitting with the military motif, given honorary army ranks – Puskas became known as the ‘Galloping Major’ (a little misleading, as the player was better known for his astonishing close skills and rifle like shot rather than his speed).   Olympic gold was followed by massacres of England – 6-3 at fortress Wembley and 7-1 back at home, and the World Cup should have belonged to Puskas and his side, until a strong fightback in the final saw the trophy head to West Germany.   The vicious tackle on Hungary’s star man when the two sides met earlier in the tournament undoubtedly reduced his impact in the final, and caused him to miss both the quarter and semi finals.

But life in his homeland was becoming more and more difficult.  The Communists employed fear to ensure that their greatest football stars remained loyal – including the alleged execution of a footballing defector, Sandor Szucs, in 1951.

However, with Hungary facing Civil War, and nightmare images leaking from the country, Puskas, at the peak of his powers, felt he could not return.  Initially, it was reported that he had been killed in the conflict, but this was discounted after he played for Honved in a 5-5 draw with Real Madrid.  As a result of his self-imposed exile, all mention of him in the media was banned in his home country.  Seeking a new club, Puskas trained with Inter Milan, but politics intervened and he was not allowed to represent them on the field.

Finally, after two years out of the game, an overweight and unfit Puskas signed for the mighty Real Madrid, at the time by far the finest club side on the planet.   Argentinian Alberto Di Stefano (who had become a Spanish citizen by this time), was the team’s most famous player.  The notoriously difficult striker did not immediately hit it off with Puskas, whom he is alleged to have referred to as ‘Fatso’.  But the Hungarian bore no grudges, and indeed set his partner up to score from close range, allowing him to become Spain’s ‘Golden Boot’ winner, when he could have secured the accolade for himself.  Later, he would win the award on no less than four occasions.

History shows that Puskas went on to become regarded by many as Real’s all-time greatest player, scoring and playing regularly well into his late 30s.

With his home country banning all news of him, his eventual return to Hungary in 1981 was a cause of enormous anxiety.  He may have been the greatest player his country had ever produced, but he was unsure of the reception he would receive.  He should not have worried.   Tens of thousands turned out to cheer their hero.   He would even go on to coach the national side.

If Puskas did not always live up to a role model image off the pitch – it is said that his only word of English was ‘Visky’ – this was more than compensated for by his performances on it.   The ex-England Manager Bobby Robson reveals in his autobiography that the Hungarian was impossible to work with during an ill-conceived managerial partnership in the late 1960s, yet he still reflects that it was seeing the Magical Magyars, with Puskas at the helm, that led him to start a study of Football which would ultimately lead to a place in the affections of every English football fan

Billy Wright, captain of the then apparently invincible England side humiliated by Hungary tells of frequently ending coaching sessions at Arsenal by replaying the Puskas drag back that left him on his backside as the player went on to score in that 6-3 demolition.

Perhaps most famously, three of the finest British players of all time, George Best, Bobby Charlton and Denis Law, recount the story of how, coaching with Puskas in Australia, the former player was unrecognised and disrespected by the young prodigies.  He proceeded, in a display of phenomenal skill, to hit the crossbar nine times out of nine before flicking the ball over his shoulder and volleying onto the bar for the tenth.

‘Who is he?’ gasped the awe struck teens.

‘Mr Puskas to you.’  Best replied.

When Ferenc Puskas died, aged 79, in 2006 his place in the footballing hall of fame was already secure.  Messrs Messi, Ibrahimovic and Neymar will go on to gather even more footballing accolades.  When they too hang up their boots, it would serve them well to remember that one of their greatest achievements is to be associated, through his FIFA award, with the legendary Mr Puskas.