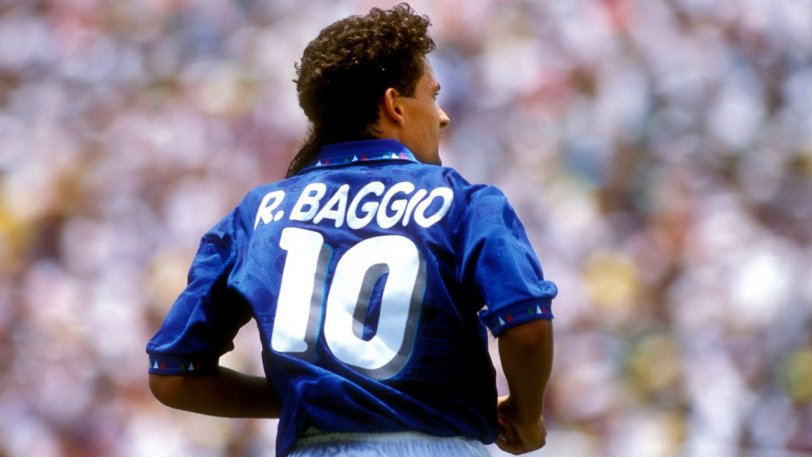 For many the biggest inheritance that Roberto Baggo left to world football was the moment he lost the penalty shoot-out in the World Cup final of 1994. The moment he shot the penalty sending the ball to the American sky of Pasadena in California, was imortalized for ever. The camera caught Batzio to be melancholic afterwards. He knew what was going to happen. He lost it.

Immediately, he put his hands in the middle and saw the fans, not of his own country, but Brazil to break out in frenzied celebrations.

Baggio’s image at that moment, among so many mixed emotions and thoughts, is what summed up his career. The Italian led his country to the final, saving Italy from a humiliating defeat by the Nigerians at 16, scoring the winning goals against Spain and Bulgaria in quarter-finals and semifinals respectively.

Unfortunately though he lost the penalty he had to put. Earlier Baresi had missed another penalty making things already tough.  Roberto Baggio simply had to score in order to give the opportunity to Pallgliuka -goalkeeper of Italy-to save the following penalty and even the two teams.. but he didnt..

Roberto Baggio had always that love and hate relationship with people. Take for example Florence where he used to play for Fiorentina.

Batzio had hurt them in the past when he left for Juventus in 1990. In the years before this extraordinary move from the Florentine artistic to Turin, Robbie fetched the Artemio Frankie with a grace each time he touched the ball scoring some of the most beautiful goals ever scored on Italian stadiums. He had a modest behavior on the pitch, he did not provoke with his behavior. But that did not mean anything when he mentioned that he wanted to leave and go to Juventus.  Fiorentina fans did not want to lose him, and so riots broke out in the city upon the announcement of his transfer.

Baggio had to grow up as a footballer and a person really fast after that moment. .  That time, June 1990  was a month to remember for himself and for Italy.   The world cup took place in Italy and the “blue team” hoped that it was there time to win the cup once more. A modest, relatively, group took advantage of the home ground and reached up to the semifinals, where they were disqualified by the Argentines , playing impressive football at times.

The tournaments number 1 goal scorer Totto Skilatsi, Maldini, Mancini, Donatoni did what they should, but Batzio was the one who stood out and even scored the goal of the tournament against the Czech’s. A special goal that was part of highlights for many years

He was scoring such goals constantly in the past years with Fiorentina’s Violet Jersey making fans love him unconditionally despite the major injuries he had at the beginning of his career on Artemio Franki. So, it is not surprisingly to see the tension caused by his upcoming transfer to Juventus shortly before the 1990s. Since that point Juventus games with Fiorentina were never the same again.

But Baggio proved in practice his ties and love for Fiorentina and his followers next year when he refused to shoot the penalty he won with Juventus in Artemio Frankie. The score was 1-0 in favor of his former team and even eventually played by De Agostini, it was lost and Fiorentina won 1-0.. At some point he was substituted and his friends Viola threw a Fiorentina scarf. He picked it up and kissed it. The whole stadium began to cheer him up. Like good old times.

The transfer had cost 10-12 (current) million, a record amount for world football at that time. It was the last time Fiorentina has sold a player to Juventus, until Higuain recently.

Batzio’s successful career was full of injuries, a long lost penalty, tension between two cities, fights with coaches and gorgeous goals. The “Little Buddha”, as they called him because he had embraced Buddhism, with the characteristic ponytale , and was unconditionally loved and loved by the Italian public.

His popularity even today is soaring, the fansof Vicenza, Fiorentina, Juventus, Milan, Bologna, Inter and Brescia (the teams that played chronologically) loved him and respect him even today.

Since 1990, Fiorentina – Juventus is huge derby with a lot of passion. The only reason is him.