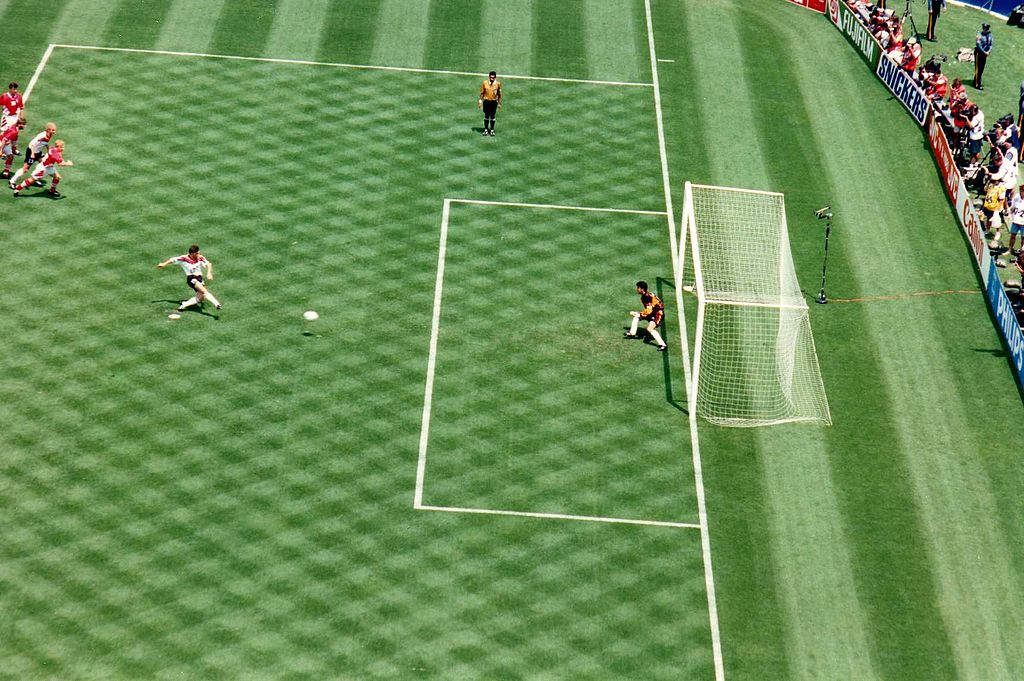 It’s a tough place, Aberdeen.  The Granite City.  Home to just under a quarter of a million inhabitants, the iced wind blows in from the North Sea, and helicopters still transport hardened workers to the diminishing oil fields nearby.  And whilst it might now be home to the highest concentration of millionaires in Britain it remains an odd choice of destination for a flame haired footballing superstar to make as his career developed in the 1990s.

But for Ilian Kiriakov, a full back in the strongest team Bulgaria have ever produced, semi-finalists at the 1994 World Cup, it was the place of choice as he joined the Dons for £400000, aiming to grace the freezing field at Pittodrie.

Sadly, it didn’t work out for Kiriakov, and rumours that he enjoyed the night life more than the football meant that Scottish glory did not come knocking.  Still, with his gingery locks, smallish stature and freckles, he certainly looked like the archetypal Scotsman.  Today, you can buy online his face on a football card for just £4, so fleeting is fame.

But in the States, in ’94, Kiriakov was a key member of the Bulgarian side from the knock out stages onwards.   Others in that team went on to gain greater fame, most notably their star man, Hristo Stoichkov.   Uniquely amongst the Bulgarian squad, his was already a household name and the forward cemented this status by famously sharing the ‘Golden Boot’ as leading scorer in the tournament (Oleg Salenko’s five in one match versus Cameroon helping him to equal Stoichkov’s tally of six, even though Russia went out in the group stage).  It was the quality of the goals: devastating shooting, pacey breaks and one stupendous free kick against holders Germany that helped to make him such a favourite amongst not only Bulgarian fans, but those from around the world.

Sturdily built, an early proponent of designer stubble, the Barcelona striker was also no stranger to controversy – he had been banned for life for his involvement in a riot (subsequently rescinded) and was suspended for two months whilst at the Spanish club for stamping on the referee’s toe.  But these flaws were easily forgotten by his legion of followers as he bestrode the tournament – a genuine superstar who would win the Ballon D’Or in that World Cup year.  It is easy to imagine how such a combination of maverick and magician would capture the hearts of fans so recently released from their own repressive regime.

However, one man does not make a team, and this was Bulgaria’s golden generation.   In fact, since beating Germany in ’94, they have failed to win another game at a World Cup final, qualifying just once in the last 23 years.  Looking back at a photo of the team from that era, what strikes first is the astonishing collection of hairstyles – mullets, one balding pate (allegedly, but probably not, the result of fall-out from Chernobyl) and a (supposedly) wig-wearing ‘keeper who would move on from World Cup heroics to play for Reading.

Indeed, Borislav Mikhailov, who captained the side at the World Cup, made more than a hundred appearances for his country, and remained involved in the game after retirement, being elected to the Eufa executive in 2011.

Yordan Letchkov, he of the Chernobyl induced baldness, was another star of the side, using his head to brilliant effect in scoring with a diving header during the 2-1 victory over Germany in the quarter finals.  A hero to his fans for his combative style, sadly, matters went downhill for the maestro when he failed to make the 2008 World Cup squad.

Many others of that collection of players went on to coach after their retirement from playing, including two, Stoichkov and Luboslav Penev, who later managed the National side.

However, one of the saddest stories from that team revolves around central defender and colossus, Trifon Ivanov.  Loved in equal measures for his out of date mullet, fearsome beard, occasionally wreckless challenges and willingness to shoot from 40 yards when many better options existed, the player nevertheless had an outstanding World Cup.  Playing Argentina in the group stages, he came up against the lethal Gabriel Batistuta, and the striker never had a look in.   The defender, once described as amongst the best centre halves of the 1990s, gained sufficient cult status to have a tournament in Brazil named after him.  However, in 2016, aged just 50, Ivanov died suddenly of a heart attack.

As for the tournament itself, a dispiriting defeat in the opening game, 4-0 to Nigeria, seemed to suggest that the players’ stay in the USA would be short-lived, but they hit back with victories over Greece and Argentina to set up a last 16 clash with strongly fancied Mexico.

A 1-1 draw was followed by a win on penalties, and then the infamous quarterfinal victory over Germany.  A match that was described by Stoichkov as ‘an easy win’ was widely considered as the finest moment in Bulgarian footballing history.

Defeat followed in the semi-finals against Italy, and, with the dream punctured, Bulgaria went on to finish fourth, following a heavy defeat to Sweden in the play off.

Perhaps it was the escape from the constraints of Communism that inspired such a generation of footballers.  Players had until recently been banned from leaving the country to play abroad, at least up to the point where their careers were past their peak.  Maybe the collapse of political restraints, with the opportunity that gave for players to develop their skills and awareness through playing elsewhere, offered the golden generation the opportunity to drive their careers forwards.

This can only be conjecture, but what we do know is that, after such excitement, only the thrills of Aberdeen would do, at least for Ilian Kiriakov.