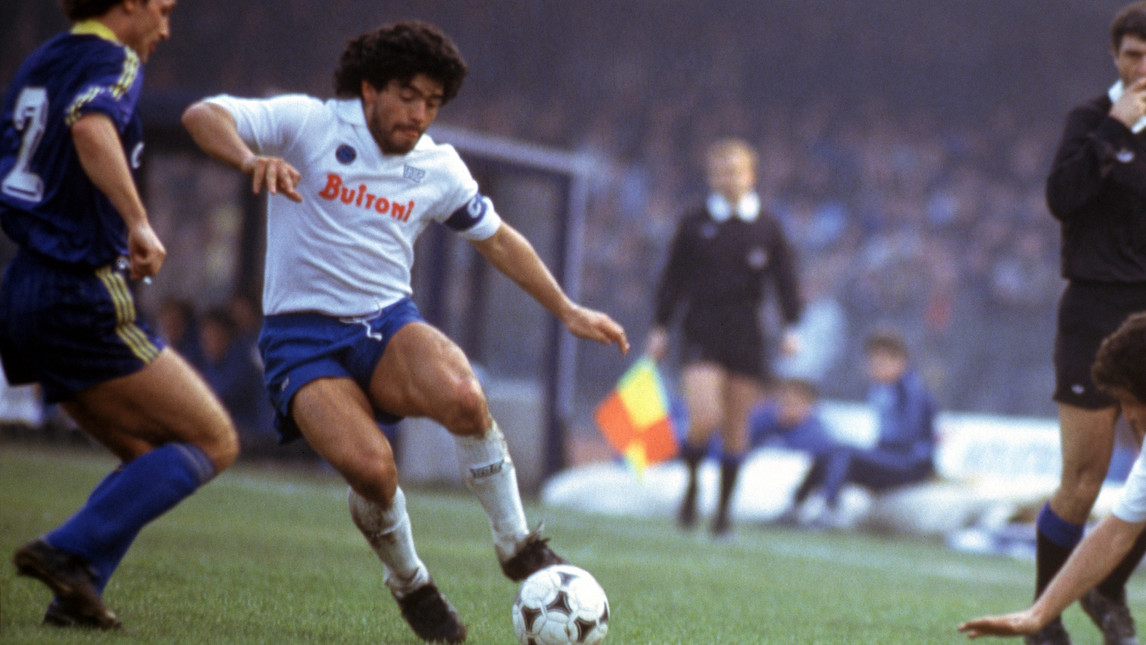 The Italian 90 World Cup was the first one that i managed to see and remember it to its fullest.  There are many stars from that world cup which dominated my life in the later years but no one more than the Argentian legend Diego Armando Maradona.

Even if his accomplishments as a playerare really well known not many people remember the background behind that whole World Cup which eventually led to his fall and demise from World Football. Most of them are rumors and very few can be proved but maybe that is also the reason why he is remembered so fondly as a person and player.  Its part of his legend…

Maradona’s transfer to Napoli over a record high of 7,000,000 euros opened new horizons to the Argentian. Finally, he would now stay in a city that mostly reminded Buenos Aires, with inhabitants and mentality where he would be more connected than the Catalans.

In Italy at that time, things were quite strange and divided. Giuseppe Garibaldi was the one that politically united Italy in 1861, but one and a half centuries later, the country had not been homogenized on all other areas. The poor South of Italy was cut off from the rich and powerful North. The economic gap was “colossal” in all aspects of everyday life, and football was no exception. Since the Second World War, the triangle of the capitalistic north Milan, Turin, Genoa, had won 33 championships in 39 seasons. Basically the championship was always a part of three teams. What about the South?

Napoli, the largest team in the South, had managed to win only two cups in her trophy cabinet, and every time they were traveling in the northern part of the country for a match they were always facing a hostile environment. The northerner fans were always making sure to make them feel welcomed.  Insults,  to go and wash themselves and wishes that Vezouvios (the well known volcano in south Italy)  to burn them was something really common in the games.

Well, they weren’t going to get burned….Instead, Napoli was buying the 23-year-old Maradona, spending a record amount for the season. That’s were all the stories and legends started.  You see Napoli never had such a huge amount of money in there bank accounts to buy Maradona. So everybody started to wonder where did the money came?

A French journalist Alain Shiyu, defying the presentation of the  footballer with a helicopter in front of 70,000 people in San Paolo did ask the Argentian player about this fact. Maradona did not answer the question of the press conference either because he did not understand it or because he chose to.  Either way that added more fire to the speculations. The rumors were that the money of the transfer was not gathered by the banks of the city but by the local mafia of the city.

With him wearing number 10, Napoli has managed to reach the miracle of 1986-1987, the first scudeto of there history. The tie with Fiorentina in the last game of the season helped them to top Juventus, AC Milan, Inter and Roma. They were finally champions!

Unprecedented celebrations lasted one week. Every evening there was party on the central square of the city, and moments of absolute worship for Maradona had already been set. Slowly, the city formed ties with Argentine , which managed to drive the revenue of most of Naples’ businesses.

The restaurants added a scadetto dish on their menu, the souvenir shops included Maradona in their products, the shoemakers transformed shoes by putting a “touch” from the football team. Every family business and every professional was trying to incorporate what Maradona performed every Sunday at San Paolo in order to increase his profits.

Each victory meant money, in addition to mental euphoria and satisfaction for the simple people of the city. Some others though had a different view on what success meant and they tried to pass this opinion to Maradona and his teammates the following year, the only year of the aggressive Triplet “Ma-Gi-Ca”,  Maradona – Bruno Giorgano and the brazilian striker, Careca.

The champions of Italy looked like the favorites to keep the sights in Italy and the amazing start of the season proved that not even Milan’s Dutch were able to stop this phenomenon. So who did stop them?

Camorra did not approve the conquest of the championship by Napoli and the reason was economic. You since they won the first championship now everyone in Naples and South Italy were betting for a repeat. Now,  if Napoli did won the championship, the legends says that Camora would have to pay a shit loads of money to the people.

The reaction was … As expected. Personal threats to the players, Salvatore Bani was beaten, and  Maradonas car was broken. Over time, each team player received his message through threats and that was clear: Lose the title

Five games before the end, Napoli was ahead with four points (the victory gave two points), having the lead from the premiere and having lost just two matches. In the second place was Milan, the only team who could – in theory –  steal the title. On May, 1988, the two teams played in “San Paolo” and “rosonseri” prevailed with 3-2. By the end of the season, Napoli managed to win just one of ten available points and the title returned to the Italian North.

The former member of Camorra, who, in his arrest, co-operated with the authorities, Pietro Poulièse, revealed that following this development (for which nothing formal was proved), the Napoli players were rewarded by the Mafia. Access to luxury prostitutes, drugs, yachts, wild parties in discos in the hills, and even closed dinners with the organization’s leaders were in the program.

Maradona, was addicted to cocaine by now, as he admitted many years after years. Reports were told  to have been the number one link to the Mafia. The “dark” needs suited both sides as Maradona continued to be the local god in Napoli even if sometimes he wasn’t reacting so positively to them.

“I cannot understand how they put me above their god or mother, I do not agree,” he said at that time to the Napolitans, while in another interview he argued that the city was not the most beautiful of the world and that the inhabitants had defects , but they would not be changed by the one who came from Buenos Aires. Maradona always spoke openly about any matter, and the Napolitans did not care because “you can not criticize God,”  even if they described him as “arrogant.” 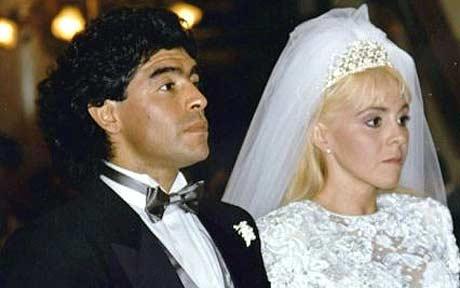 The marriage and the … return of the title

One would expect that the wedding with Claudia Vivafan’s  would calm Maradona and mitigate his passions. It wasnt to be..  The marriage took place in Buenos Aires and costed around 2,700,000 euros, while Maradona at that time was paid 7,200,000 euros a year, of which only 1,500,000 euros came from the contract with the team. In the mystery held at the largest church in the capital of Argentina, there were 1,200 guests, 99 golden rings hidden in the wedding cake, while the orchestra had 80 members. The couple withdrew with a Rolls-Royce Phantom III, which was rumored to belonged to Joseph Gobels.

1989 could have been a dream year for Maradona with marriage and conquest of the UEFA Cup. Not to be though.. The Black Clouds in his relationship with Napoli “broke out in June, when rumors were released for sale in Marseille for more than € 14,000,000. Maradona responded by naming “cretins”  the fans who were reacting. “In August he was absent from the preparation, citing fatigue while circulating his photos of skiing,” the Napoli president urged him to go through the training, Maradona refused. Then it was the turn of the Camorra, which threats succeeded his return. He was punished with fines of 63,000 euros from the club.

Things were not good for Diego, so it would not be good for Napoli either. The team was winning but not with the ease of the not so distant past. The team had some really good players at the time including the brazilian midfielder Alemao as well as a you Gianfraco Zola. Camorra though attempted to return what it deprived in 1988.

Two races before the end of the season and Napoli was equal to AC Milan. “Roseneri”, who had already been crowned European champions and a few weeks later would become the last team -before Real Madrid did it again-  to keep their sights in the top interlude, were tested away from home with Verona who was second from bottom at that point.

Frank Raicard, Marco Fan Basten and Alessandro Costaquarta were shown a red card while coach Arigo Saki was forced to see the game from the stands after a strong protest for a clean penalty on Van Basten who was not given and for the offside winning goal home team. Paolo Maldini called this fight as “the most controversial of his career”. Milan lost in the end 2-1 and with the defeat essentially crowned champions the “partenope”.

A few months later, at the 1990 World Cup,  the glass between Maradona and Camorra was broken. Argentina reached to the semi final against the home team of Italy.  The former world cup winners were not playing the best football but moments of brilliance by Diego and the strong presence of Goygochea under the post have propelled them  to the next rounds.

On the other hand Italy was on great form  with the surprise striker Toto Schillaci scoring goals and the young Roberto Baggio assisting. Everything was set for a great game and the Italian fans were allready dreaming of the final.  There was one problem though, the semi final was played in Naples, were Maradona was still a god.

The Argentina’s attempted to turn the Naples world against Italy into the semi-final. “The Napolitans must remember that Italy remembers them one day and forgets them for 364” has caused great reactions to fans, and divided Italy. Combined with the inexplicable decision at that time by the Italian coach to leave Roberto Baggio out of the semi final, led the game to the penalty shoot out.

Maradona scored the final penalty for Argentina leading them to the final.  It was natural that in Rome the whole of Italy was supporting the Germans.

Led by Lothar Matteus and Jurgen Klinsmann while having the “Kaizer” Frans Beckenbauer guiding them on the bench, the Germans won by a really dubious penalty decision. Really shame as the Germans had a really good team at that time but Maradona stole the “fame”…

Once Camorra ceased to protect Maradona, the curains fell. It is characteristic of the incident a few days before the final, when his brother Maradona, Lalo, who was in Italy, attempted to lead Diego’s red F-40 (worth 290,000 euros) outside the Argentine training center. The police had a mandate to look after this particular car and make sure its legitimate driver was driving it. One night, however, Lalo was behind the wheel of the car, without a diploma. A gigantic man, Maradona’s husband’s brother, left the co-driver’s post, and the disagreement with the police became much more intense. Maradona hearing the news left the training center, attacked the police officers and accused them of wanting revenge for the disqualification of Italy. Vieiyane and Argentine coach Carlos Billardo also came out of the training center and tried to hold Maradona. Two police officers were led to the hospital with minor injuries. 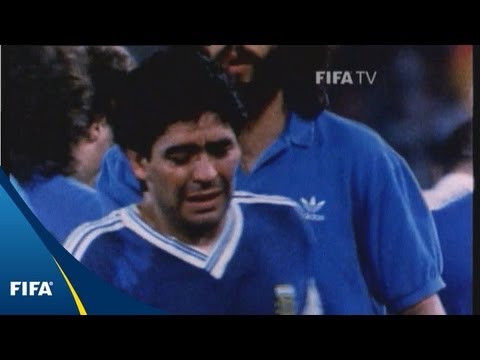 After the World Cup permanent tax audits, doping tests, and on March 17, 1991, the bomb exploded: Maradona had found himself cocaine-positive in the Bari championship match, resulting in being punished for 15 months absent from the stadiums. Tax breaks were added to the stack of the problems of Maradona, who was hunted by everyone in Italy now, deciding not to serve the remainder of his contract to the group that glorified to the supreme grade for seven years and returned to Buenos Aires.

The king was fallen..